How to Preload cache in wordpress on Linux

I’m using memcache with w3c total cache plugin to cache pages on my wordpress site on Ubuntu Linux. The way it works is whenever someone hits a page, that page gets cached. But the first user has to see higher latency. This is not such a huge problem if you have lots of traffic. Only a small fraction of users will see that higher latency. But if you are obsessed with site performance, you can reduce latency for even first time users with cache preload. 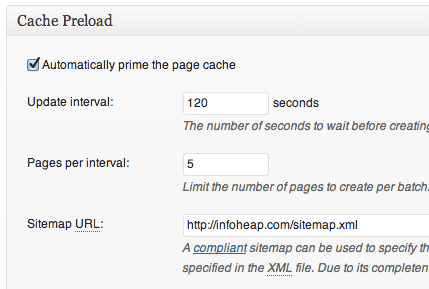 This approach gives you better control over cache preload. This can work well if the number of articles on the site is a manageable set. Here are the steps:

Note that in this approach cache get reloaded fully at specific interval. While cache is getting loaded, the url latency will be high for users accessing the site at that time. So this approach works best if the number of articles to manage is not huge. Tentatively for a site with 1000 or so articles, cache loading can happen in 10 min or so for AWS small EC2 instance.

Faster loading sites are always good for users and hence site performance is linked to SEO as well. Google also shows crawl stats (time spent in downloading a page) in webmaster tools under Health section. Here is how it looks: